Part of the "Across America" Exhibit was a simple 13'x 10' painted outline of the US map filled in with thousands of play money bills. The idea Joey and I had was to then have individuals share their heart's desire in life on a "dream cloud" (paper cut in the form of a comic think cloud) and place on the map thereby covering the play money. As the dream clouds increased, America would be filled with more and more dreams thereby lessening the focus and/or importance of overwhelming money. Funny thing is, I didn't count on how rare it has become for adults to think of such things as what one has as their heart's desire. It seemed to transform into an experiment into working Americans' conscious and even sub-conscious. Joan Thate has been on the frontline this month collecting more than 500 dream clouds from people coming by the studio( in truth I was satelliting the project at my day job Clothing Warehouse as well, though a watered down impact to be sure) and the following is a window into how this request was received by those asked a question that should be inherit to their being through Joan Thate's eyes and heart.....

Americans Dream at the Suite 106 Gallery.

When the homeless lady was waiting outside the glass doors of the Suite 106 Gallery in the Jacksonville Landing the second day, I’ll have to admit to a touch of both anxiety and irritation.

She had come by the day before and commandeered the one desk in the front exhibit room of the gallery, slowly exploring her wishes and asking over and over if writing one thing or another was acceptable, even after I had assured her each time she asked that the point of the little paper “thought cloud” she was crowding with cramped words was to be a place for her to be honest about her own dreams. She had told me she had no living space of her own, and didn’t even want to admit where she had been staying. Four or five times, she asked for help with spelling. Although she was a bit strange, I could tell she was harmless and probably just lonely.

And here she was again, asking when “I” would be open and if she could write some more dreams. How could I possibly say no? I told her to give me some time to get organized and to come back in a few minutes. And indeed she did come later. And once again she agonized about what and how to write. When she finally finished and asked me to read her work, I realized she had written essentially the same as yesterday’s wishes for a better life, including a Publishers Clearinghouse win, but that the wishes today had slowly evolved into a prayer. And both days her hopeful list ended with a desire to help the homeless.

As she left, she said she was going to get some of the cookies down the mall a bit, cookies so good she knew she was addicted to them. Along with the overwhelming sadness I felt as I watched her walk away, I also experienced not a little shame over my minor impatience and vague distrust .

She was not the first nor was she the last of the gallery’s visitors to touch me emotionally as I have volunteered there on Thursdays and Fridays this month.

Artists Kim Barry and Joey Thate (full disclosure: I am Joey’s mom), whose studio is in the large back room of the Landing suite, planned a front gallery red white and blue /American flag painting/sculpture/pom-pom/star-spangled tennis shoes exhibit appropriate for the month of July 4th to open on the night of Art Walk. But they wanted an interactive component, so on a perhaps 15 by 20 foot wall they painted a huge rough outline of the USA which they filled with thousands of the tiny play money one, five, ten, and twenty bills you can buy at the dollar store, the kind elementary teachers like to use to demonstrate equivalent values.

They wanted visitors to share what it was they most valued. Was it what we often assume is the highest goal in our country—the money? Or something else? Would people be able to imagine beyond the perceived limitations lack of money can impose?

They decided to couch their questions in a slightly oblique way—asking people to share their dreams, their hopes, their desires. Visitors could write their cloud-shaped dreams and tape them floating above the money-encrusted map of the nation. It’s the kind of exercise that can teeter pretty easily on the brink of being hokey. Frankly, hokeyness was what I expected. I was wrong.

My “job” on those volunteer days was to collect these dream clouds.

The map is now completely covered with hundreds and hundreds of clouds, and they have even spilled over onto other walls and the windowed doors of the suite. I’ve collected maybe half of them—and each, because they came from somewhere real inside such a wide variety of people, has changed me a little bit.

There are those who dream of wealth—from “enough” to fabulous riches, but they are the minority, actually.

There are the frivolous and funny dreams—of being the 5th Beetle or building a snowman in Jacksonville, for example.

There are the dreams of budding artists that their music or painting or acting might one day support them so they could do what they loved for a living.

There are the dreams of parents for their children to be healthy and happy and successful and safe.

There are the dreams of what could be done for others—inspiring students to become lifelong learners, or opening a half-way house for aged-out foster children, or teaching kids entrepreneurship and financial wisdom, or loving the unloved, or—helping the homeless.

There are dreams of love—marriage and children or just “a man—preferably wealthy.”

There are dreams of being free of fear and anxiety.

The dreams came from all over the country—Texas and New York and North Carolina and Tennessee.

There are dreams in Russian and Dutch and Spanish.

The dreams are global and specific.

The dreams are for right now and for always.

Older people were less likely to share a dream, as were the time-constrained business men and women who frequent the Landing for lunch. The later are understandable. The former made me sad, because I too am old but not yet ready to give up on dreams—and I don’t look forward to losing hope.

Kids, of course, entered the activity most easily. Each knew exactly what he or she wanted, from Justin Bieber tickets, to training dolphins at SeaWorld, to riding a bike all day, to seeing a shooting star. A group of late teens from a pre-law job corps group visiting from Gainesville wanted jobs with the CIA or FBI or with their local police force.

I’ll never forget the one very solemn little girl, probably five or six, one of a yellow-shirted day camp group, who waggled her finger for me to come closer to hear her say she wanted to help those people who need it most. Her teacher later told me this was an accurate expression of this child’s deepest self.

In that same group was a small boy about the same age whose face and smile bore more than a passing resemblance to the president, even a little with the ears. What was his dream? To be president and superman. I thought to myself, Go for it, buddy. And you really do kind of need to be both to make the president gig work.

There are way too many stories recount them all here.

I found myself constantly moved both to laughter and near tears. I hadn’t expected the fun—or the honesty. And the experience has reawakened for me a sense that we have not, collectively, lost our way as a nation because we are a collection of so many good and hopeful people.

Many visitors thanked me (really Joey and Kim) for allowing them this chance to think anew about what they really want. One lady said, as she left, that she felt this was a spiritual place. I think I understand what she was trying to say: when we reach down for our deepest dreams we are in touch with our spirit selves, with what we really believe. The real spiritual space is within.

Downtown Vision and their Off the Grid galleries deserve praise and gratitude for their work towards renewing the spirit of Jacksonville.

The “Across America” exhibit will continue throughout the month of August 2010 at Suite 106 inside The Landing. Come for Art Walk on Wednesday night when a local group, Pretty to Think So, two talented young musicians at the beginning of their dream career will be performing all evening with special performance by Jessica Pounds. Or stop by Monday through Friday between 11 a.m. and 2 p.m. all month.

Posted by Kim Barry Studio at 4:37 PM No comments:

"Across America" Photos by Tiffany Manning 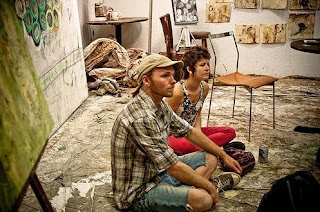 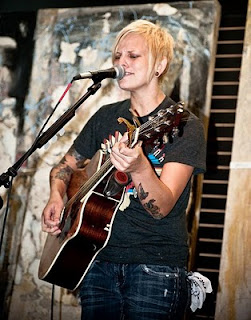 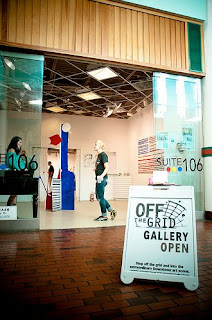