I am delighted to be a part of this wonderful, upcoming event. 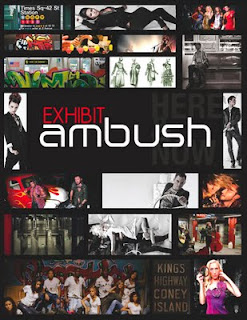 AMBUSH EVENTS LAUNCHES EXHIBIT AMBUSH AT THE HORTON PLAZA
FOR IMMEDIATE RELEASE
On October 22, 2011, Ambush Events will take the public by storm with their featured event, “Exhibit Ambush” in the Gaslamp district of San Diego, CA.  This event will push the artistic boundaries; while simultaneously keeping the audience in awe. EA will be a unique collaboration with some of the world’s most unique artists and fashion designers. This event will use charity as a means of outreach to raise money for a good cause. A portion of the proceeds will be donated to, “The Amazon Foundation”. The Amazon Foundation was established in 2009 to acquire and preserve large tracts of the Amazon rainforest in their natural state in order to maintain its ecological function, biodiversity, and climatologic function and to protect the region's long-term ecological viability. The foundation is a 501 c (3) nonprofit organization with new and innovative programs to benefit children’s charities and raise awareness about the Amazon rainforest.
This event will enable people to discover and view more than a hundred artworks displayed and ten legendary-eclectic designers showcasing their extraordinary garments in meticulous detail. It will be risqué, groundbreaking and inspiring for those who relish in taking risks. In addition, this will allow the audience simultaneous interaction with the talent. There will be live body painting, professional dancers, fine art, fashion designers, accessory designers, graphic artists and live performances by the hottest DJs in town.
Over the last 18 months Ambush has worked with freelance undiscovered talent, and trained artists that are the alumni of a few local art schools including, the Art Institute San Diego, Art Institute Los Angeles, Parsons and FIDM. The process of selecting talent involved social networking, research and a few radio and newspaper castings.
With this unique project, anyone anywhere in the world will be able to learn about the artists at this event by the click of a mouse. This show will be live on the internet, in addition to the designers showing their “on” season garments. Be prepared to get “Ambushed”.
For more information regarding Exhibit Ambush, please contact Executive Producer- Antoinette Ransom on the office line (818) 400-6308 or go to www.ambushevents.com . We also have an office in the trendy gaslamp district 770 11th Avenue, San Diego 92101. Virtual Assistant contact: Tashina Beckmann at (719) 661-3435, or Kenneth Harvey, Personal Assistant at (858)761-2292. You could reach all of us at this email: theambushevent@gmail.com . 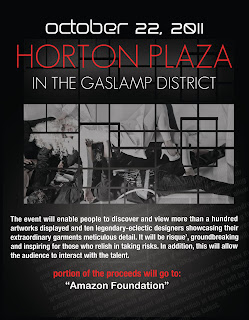 Posted by Kim Barry Studio at 11:38 AM No comments:

The Circus Comes to Town

LACMA's Costume Council previews Cirque du Soleil's 'Iris' costumes
By Jennifer Elias
Published on June 29, 2011
Last Wednesday night, The Costume Council at LACMA closed out their season of fashion programming with a preview of Iris, Cirque du Soleil's cinema-themed spectacular that is scheduled to begin previews for a decade-long run at the Kodak Theater next month. And while members of the Council were treated to an actual scene from the performance, the evening focused on the costumes of course, with Iris costume designer Philippe Guillotel on hand to talk about his masterpieces in the best English he could.
"Magic" is how Guillotel described his intricate, elaborate stage wares — many of which feature working parts and serve dual purpose as scenery. "I love technology. And I want the costumes to just work. When it works, it's beautiful."
Among the 1920s, Art Deco-infused pieces that worked were a film can "hula hoop" that spun around its wearers hips, a vintage movie camera-as-a-hat with a working spotlight and an old timey, ruffled bustle on legs affixed to a wheel, so one actress can create the illusion of two.
Guillotel is no stranger to making magic happen through clothing, having costumed the opening and closing ceremonies of the 1992 Winter Olympics in Albertville, France and also Cirque's production of Love, the Beatles homage that continues to play in Las Vegas.
When he began work on Love, he didn't know much about the Beatles. Ironically,  LACMA's pop art collections ultimately served as his inspiration.
After a breakdown of sketches and examples of Iris' simpler styles — a velvet usher's outfit with a cloche hat (the bodice of which happens to serve as a film projector) and the 1920s bloomers that serve as an essential prop on a set of airborne twins — the audience caught a glimpse of a full-on Iris fashion show, complete with a a phonograph headpiece that fans out, a major braided wig and yes, the celluloid hula hoop.
They weren't the only ones who put on a fashion show. We caught some major outfits at the event reception, which took place in LACMA's outdoor courtyard — many of them worn by Costume Council members.
But no celluloid hula hoops. We'll have to go to the Kodak for those.

Laurie Brucker
Job: Personal stylist and wardrobe consultant, founder Lauriebstyle.com
Wearing: A dress from Squaresville in Los Feliz, Club Monaco tux jacket, vintage cuff and Michael Antonio shoes.
Why she caught our eye: Because confidence looks good.
China Dolls
Job: To contort their bodies into positions that would send us to the hospital.
Wearing: Metallic bodysuits.
Why they caught our eye: We've been meaning to take up Yoga.

Sara Muller Chernoff
Job: Art collector, vintage fashion aficionado and longtime member of the LACMA Costume Council
Why she caught our eye: Her spectator Oxford shoes look exactly like ones seen in Iris.

Kim Barry
Job: Painter
Wearing: A dress by Threadbare, her friend Jen Smith's line
Why she caught our eye: Because we had to do a double take to make sure she wasn't actually Florence Welch gone brunette.

Zoe Poore
Job: Manager of Golyester, the high-end vintage store on La Brea Avenue.
Wearing: Vintage everything — including the acrylic 1980s earrings byDynasty costume jeweler (and the late Herb Ritts' former stepmother) Judith Hendler.
Why she caught our eye: Did we mention the Judith Hendler earrings?
Posted by Kim Barry Studio at 8:45 PM No comments: