Remember That No One Ever Kicks A Dead Dog 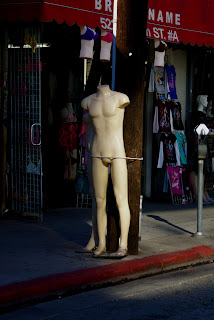 The war of words is alive and well and leaving bodies on the streets of LA as we speak.  So many think badly, treat each moment for the worse, and finish it all off by acting  out the worst case scenario as a result. Why? I blame in small part, all capitalistic fear based television- specifically 800 CSI shows running 24hr 7 for the people that never leave their house and tune in, which, sidenote,  raises the chicken or the egg question. And the million kids learning that dissecting Bobby is just another form of science lab.

Last night, as I walked down Sunset Blvd., with The Sultan and Adam O, we came upon a pretty girl in lace stockings, a metallic mini, heels that wouldn't stay on her feet or in her hands, a belly full of beer, & a head full of want. The former and continued desperation to be accepted by her very recently abandoned company, was killing her and we surmised quickly that could be a literal reality on the street alone in her condition.

So we stopped
(She almost hurled a shoe at Adam like a beat up kitten, only to realize he was another little fuzzy meow)
We talked.
We walked.
She cried, "I wanted so badly for them to like me, but they make me feel like I am nothing."

Having entered many rings of conversation, I have become quite used to adjusting mine to temporarily adopt another's out of etiquette around new voices, to fit in or impress,  or out of panicked politeness when in circles I find myself wherein secretly, I am desperately searching the perimeter for the effing catapult hidden in the host's closet behind the "Clean It Right, Clean It Fast" book series on blue ray.

I thank my mother for this gift of verbal veils that has been mastered from years of being thrown into so many different worlds of society and interest as I grew up. Wake up to elementary school with the future Gangsters of America, church with the WASPS, stopping off at the JCC for Tuesday basketball night,  can't miss theatre practice for "Hedwig- The High School Years", then later jumping out the window for a little late night graffiti in the mills, or at least hang with the boys after they do their thing.

Many languages are hidden inside my American English here. To survive, I tuned into their channel. Some channels I liked more than others- those certain channels created a double O-mom for a hot minute. But it all worked out when, graffiti bffs, Schwontz, Walshman,  and Wing Ding, promised I'd be home before 2am. That puts any fourteen year old Mom's worry at ease. But for all the interests, I couldn't help but become a watered down version of myself. Sometimes you tune in too well to others' reality, you forget to keep your own channel alive, well heard, and respected in its value.

I saw this happening in her world at an epic level. Seems she was editing herself into circles of conversation  that could end a Ted Bundy story if she didn't wake up and begin setting her own tone STAT. These are the circles where the one who wants acceptance the most, gets the least and ends up in the center as entertainment in the game "Kick Our Dog."

"But you walked away," I pointed out to her.
She looked up.
It hit her.
That alone as a statement of self worth.
She smiled.
She stood up a little taller.
She felt a little better.

She realized she had taken the jump out of a bad but familiar scene
into open, empty space
leaving the opportunity to enter a better one with us, if for just a moment,
She knows,now, a better language does exist

Posted by Kim Barry Studio at 11:39 AM No comments: