no matter the amount, who, these days, is asking "What's in it?"
In many a microcosm of work, worship, and play, turning the pure to poison and the poison to pure can be veiled in the redefining and rationalization of terms, costs, and benefits.
Bottoms Up 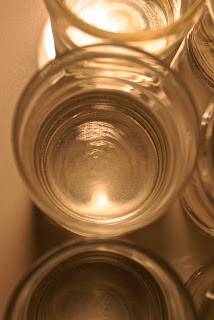 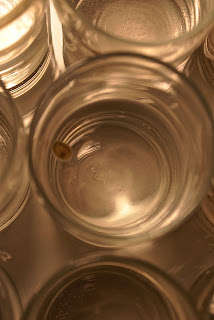 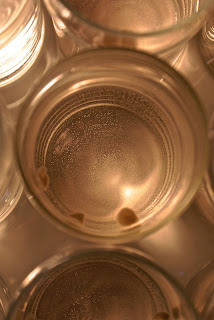 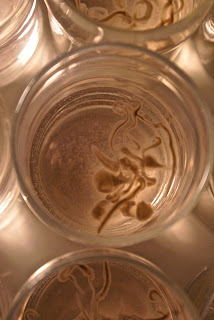 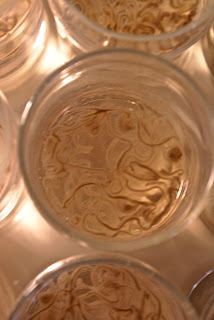 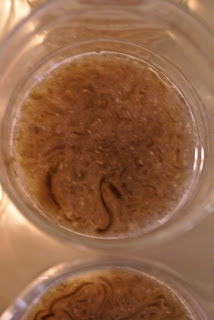 DIFFERENT PERSPECTIVES ON THE PERFECT DOSING : 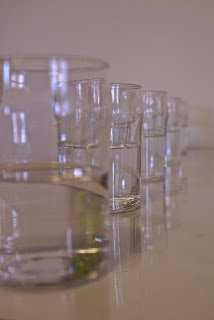 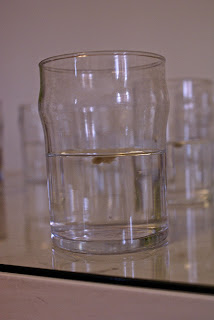 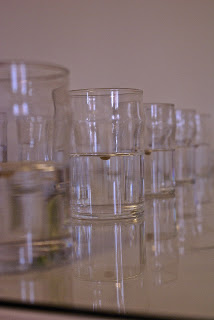 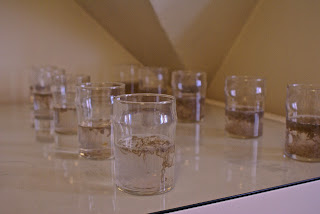 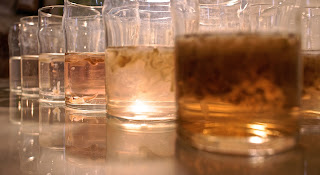 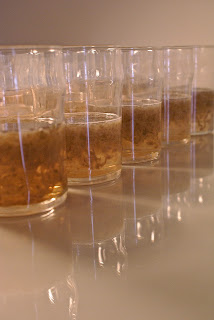 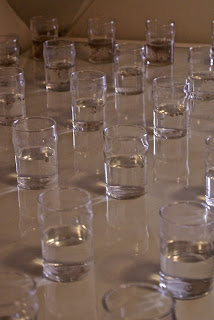 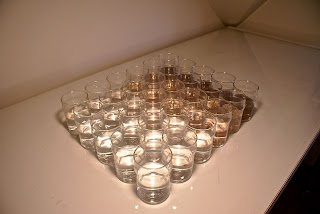 Posted by Kim Barry Studio at 5:04 PM No comments:

Being Positive About Something Negative Can Be Draining

There is an increasing amount of advice expressing "be happy, stay positive". Well, after thinking long and hard of whether I am defectively the only person left on Earth's Crazy Train who didn't get the happy pill into blind escapism, I began asking the positive/negative question to myself. Is there a positive side watching our children become mini- Ke$has? Is there a negative side to drinking Xanax tainted water everyday? Thing is, the concept of positive and negative, to me,  are self preserving perspectives we prescribe ourselves to either embrace a truth or a lie, good behavior or bad, in order to gain a sense of perceived success from or acceptance of others in life's pyramid of modern living.  But who is molding us into certain success and what circle are we truly asking membership from?

Throughout time, we've honed our energy into symbols through worship, fashion, art, politics, and corporate company work force. Some people believe their energy influences the symbol with their "positive" or "negative" intent. I seem to notice it working the other way around. The symbol itself and the higher powers behind it, use your energy for its purpose, not with your intent in mind. Over time, we begin to be the ones influenced by that symbol. Skeptic? Look at the fruit, people. Case in point--  we are "fighting" for peace with destructive results for all but a few who know the truth for their gain.  A similar energy vampirism, happened during a certain blackout after Beyonce's Superbowl ritual. There was a lot of energy there. And its not just "theatre" any longer. The ancient Greeks knew theatre was ritual in the first place. There was a lot of symbolism in her moves and stage design. That is not a coincidence. So,  where did all that energy from all the audience in the stands and at home go to cause such a blackout?  Who's purpose was unknowingly fueled? Just a thought.  Know the symbol, know the source.


**The Peace Sign and Satanism
The signal "actually began as a symbol of Satanic benediction during the rituals.'' This sign has been used by Yasser Arafat, Richard Nixon, Winston Churchill, and Stewart Meacham, Co-Chairman of Reds' New Mobilization Committee." Churchill said that the sign stood for victory but remember that Churchill was one of the insider "elite" and a Mason. He most likely knew the evil significance of this symbol but tried to give it a facelift.

The "v sign" has a colorful history. "V" is the Roman sign for the number five and Adam Weishaupt used it in the Illuminati to symbolize the "Law of Fives,'' but there's more. In the Cabala:
"the meaning for the Hebrew letter for V (Van) is 'Nail.' Now, 'The Nail' is one of the secret titles of Satan within the Brotherhood of Satanism. Satan is letting us know that this is one of his favorite signs. Why else does he like the PENTA-gram (Penta = five!) and the FIVE-fold salute used in Masonry and Witchcraft?''
Furthermore:
"The Leftists, radicals, and Satanists who have popularized that sign...know its ancient significance very well. In fact, that 'V' sign is now used extensively by such Communist organizations as the Young Socialist Alliance, Vets for Peace in Vietnam, and the Students for a Democratic Society."
Although not a hand sign, the peace symbol itself needs to be examined.
"Known as the 'peace sign' throughout the 1960's and into the present day, this symbol is the Teutonic rune of death. 1950's peace advocate Gerald Haltom may have been commissioned by communist sympathizer Bertrand Russell to design a symbol to unite leftist peace marchers in 1958. It is clear that either Haltom or Russell deemed the Teutonic (Neronic) cross as the appropriate symbol for their cause.

"Throughout the last 2,000 years this symbol has designated hatred of Christians. Nero, who despised Christians, crucified the Apostle Peter on a cross head downward. This hideous event resembled the Teutonic cross and became a popular pagan insignia of the day. Thereafter, this sign became known as the 'Neronic cross.'
"The symbol's origin in history proves it to be the visual mystic character for 'Aum' (the split 'Y'). This is the sacred word to the Hindu. Chanting 'Aum' is supposed to help awaken 'the serpent power of Brahma' at the base of the human spine. Occultist Albert Pike also identifies this symbol as mystical in his book on Freemasonry Morals and Dogma.

The peace symbol (also called the "broken cross," "crow's foot," "witch's foot," "Nero Cross," "sign of the 'broken Jew,'" and the "symbol of the 'anti-Christ''') is actually a cross with the arms broken. It also signifies the "gesture of despair," and the "death of man.''
"The Germanic tribes who used it attributed strange and mystical properties to the sign. Such a 'rune' is said to have been used by 'black magicians' in pagan incantations and condemnations....To this very day the inverted broken cross--identical to the socialists' 'peace' symbol--is known in Germany as a 'todersrune,' or death rune. Not only was it ordered by Hitler's National Socialists that it must appear on German death notices, but it was part of the official inscription prescribed for the gravestones of Nazi officers of the dread SS. The symbol suited Nazi emphasis on pagan mysticism.''
With the arms of the cross raised in an upright position, it is "a Pythagorean emblem of the course of life, in the form of a rising path with fork roads to Good and Evil.'' It also signifies fertility, but with the arms pointing downward, it denotes evil and death.

In fact, the inverted 'Man-rune'--the figure encircled in the common sign which the Communists tell us means 'peace'--has for centuries been a favorite sign of Satanists.''

Anton LaVey, the founder of the Church of Satan, used the peace symbol as the backdrop for his altar.
One former witch makes the following comment about the peace symbol:
"It is an ancient and powerful symbol of Antichrist. During the dark ages it was used in Druid Witchcraft and by Satanists of all sorts during the initiation of a new member to their order. They would draw the magic circle and give the initiate a cross. The initiate would then lift the cross and turn it upside down. He would then renounce Christianity in all three dimensions (sic) of time (past, present and future) and break the horizontal pieces downward forming the design of the 'Raven's Foot.' This ugly symbol is nothing short of blasphemy against the Holy Ghost. For one to wear or display this symbol is to announce either knowingly or unknowingly that you have rejected Christ. Remember, symbolism is a picture language, and a picture is worth a thousand words.''
Below are a few examples of how the peace symbol is being used.

Another hand signal is the Vulcan peace sign. It is supposed to mean "Live Long and Prosper," and can be seen in Star Trek.

Vulcan was a sun deity who was associated with fire, thunderbolts, and light. The festival in honor of him was called the Vulcania in which human sacrifices were offered. "According to Diel, he bears a family relationship to the Christian devil.' It is fascinating to know that he married Venus, another name for Lucifer or the devil. What is even more interesting is that Vulcan is adored in Masonry under the name of Tubal Cain. In the Masonic Quiz Book the question is asked: "Who was Tubal Cain?" The answer is: "He is the Vulcan of the pagans.''
In Masonry, Tubal Cain is the name of the password for the Master Mason (or third) degree.
Listen to what occultist and Mason, Manly Palmer Hall, has to say:
"When the Mason learns that the key to the warrior on the block is the proper application of the dynamo of living power, he has learned the mastery of his craft. The seething energies of Lucifer are in his hands and before he may step onward and upward, he must prove his ability to properly apply energy. He must follow in the footsteps of his forefather, Tubal-Cain, who with the mighty strength of the war god hammered his sword into a ploughshare.''
There is also a sexual connotation associated with Vulcan and Tubal Cain. Former Mason, Bill Schnoebelen, explains:
"For Masons who wish to conceal their membership from non-Masons, but still advertise it to their Lodge brothers, there is a special pin (or tie tack) they can wear. It looks like an upside down golf club with two balls near the top....Many people assume the person is a golfing enthusiast, but it is actually a visual Masonic pun.
"This is called the 'Two Ball Cane,' and is a pun on the secret password of a Master Mason, 'Tubalcain (sic).'...It is also an all-too-obvious pun on the 'god' of Masonry, the male reproductive organ. Nice, eh?...especially when many men wear these wretched things to church on Sunday!"

Posted by Kim Barry Studio at 7:26 AM No comments: