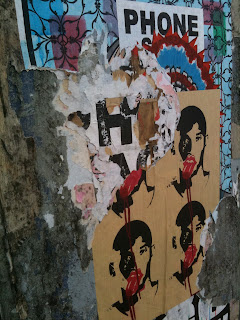 Yesterday, I picked up a little side work equipped with, my neighbor and cohort, Ryan. The adventure of the day? Being  extras for a car commercial. These are the dirty little secrets we do to hustle while we create our next great big thing no one shows up for.  So, there we are, it's 5:30 am, in the car rolling into downtown to find base camp. We arrive to a super cool crew. Oooo, do I hear German accents?
Conversation is good
The coffee is better
Then
The professional extras show up.

The parting of the Red Sea begins as the crew begins to get hemophiliac from the energy of the "silent talent." I am no stranger to this. I  have seen and experienced, first hand, the feeling of having the stinky girl game played upon me as I did this "extra casting" when I first landed on Planet LA, last year. Everyone's cool until the secret is out- you are an extra. Oh. As though my immediate situational title drains the life out of everyone else with a better one. Ok. Whatever. I go off to graze with the rest of the cattle.  As I sit, watch, & listen, I get it. I watched grown people complain and even fight over lawn chairs, meal points, placement in lunch lines, and SAG credit for DOING NOTHING. I was drained from the banal words being passed around the room like a newborn pet rock. So, I warn Ryan. "We gotta stick to each other and protect our energy, k?" He looks at me as if I am the Topless Psychic in Mallrats stroking my third nipple for visions.

We discuss the upcoming shows we are going to do and the ones we are going to visit, how cool the light looks on the buildings as the sun slowly creeps over their horizons, and such. We find a spot close enough to hear directions from a particular 1st AD who got my attention and far enough to quietly enjoy the moment of the day.

Then a sound began that gave no moment of rest for the next 16 hours. That sound? A 100 mph lost train from Missouri that was currently circling the set at full speed. What was she saying? Hmmm, considering she mentioned the word "hooker" 32 times before lunch, I assume this to be her deepest hearts desire for her life. Her first roommate was one. Her latest "break out" performance was that of a one two days before. I couldn't help but pick up on the underlying accomplished pride of sexual attractiveness she felt by playing the role- as she scarfed down half the catering truck. I am thinking a  bit of competitiveness with the former roomie, maybe? I can only imagine those talks between those two. At times, we couldn't help but be in awe in watching things go in her mouth as the sound from within never ceased in volume.

My conversation with the world is getting clearer and the people I choose to share conversations with in my daily outings is getting more and more relevant.  So, naturally, I was prone to staying as far way from that conversation as possible. Why? Because there IS no conversation there- just bullets of BS that mean nothing and lessen my ability to keep my thoughts where I want them to be.  Apparently, not only was she spraying word bullets in the air like a Colombian Terrorist, she especially honed in on the ones trying to avoid direct hits. Ryan and I, thought by walking away it would give a solid indication of polite disinterest and that would be respected and duly noted.
No.
She followed us.
HARDCORE.
Like by jumping in between our faces to announce, at maximum volume, that she was going to inject her face with green tea right then. I got the gist that my growing annoyance with her chosen one way, highway conversation only spurned her fire not to be ignored by me.

I began to think through all the engine smoke while ever more curious about that 1st AD. There is something happening here I must reflect on. Never in such a more pronounced way is there a situation where you have the great minds of creativity, who truly own their thoughts, language, and action toward the world brushing nose hairs with the lost souls of casting who couldn't value it any less or notice your lack of interest in listening any more.
I have watched an Academy Award Directing Legend standing in the food line and get bumped by a dude who can't seem to stop complaining about his lawn chair and the only thing that comes across his mind to say to this legend is," You think they can get better seats?"
Wow
Kinda awesome.
Like when my "unskilled-at-skiing," 5' Australian friend knocked a 6"4" Swede like a bowling pin out of her uncontrolled way down the slope at Hidden Valley. He flipped twice in the air before landing. Amazingly awesome and horrific. We thought she killed him, for sure.  But as he lifted a pinky in survival triumph, we knew all would be well after a couple months of rehab.

But the bigger idea I think I am grappling with is the high or low awareness we have for our own level of thought, word, and actions.

WHAT ARE YOU TRYING TO SAY?? AND WHAT THE HELL ARE YOU DOING??

People say "I want to be friends," as they play grabby grabby and call it a joke when they know the only one who really wants to be friends is the person that is about to go Kill Bill on them if they don't stop copping feels .
People say, "Oh my god I can't believe I played a hooker!', while they make sure everyone in the room knows what color the prop thong was.
People say, "I want to take things slow" as they hand you the key to their place after one date and if you raise question, they "break up" with you.
People say," I want to be successful," and then focus on the lint build up on their sweater all day and tell everyone else about it.

People run in circles with their thoughts and meanings. Those who know what they want and are clear about it, seem to get it. It seems to me that the more one's inner conversation matches their outer conversation, the more confident, stable, and successful they tend to be.  So, in the end, I was grateful to learn a lesson here.